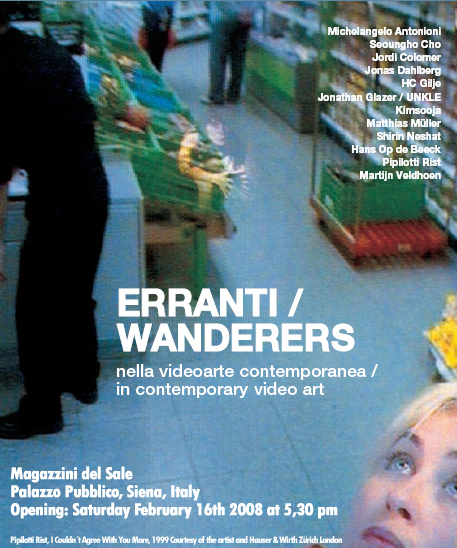 “In the suggestive medieval spaces of the Magazzini del Sale (In Palazzo Publico, Siena),
some of the most interesting international video artists and film
makers measure themselves with the idea of wandering, a very ancient theme shared by
a variety of traditions and literature, the paradigm par excellence of the human
condition.

The exhibited works were created during the last decade; they are real “journeys”, or
wanderings of the mind, dealing with the search for an identity, dislocation and
estrangement. These random or planned meanderings set up a relentless “private”
dialogue with the natural landscapes and the architectural or urban spaces.
The artists deal with the subject of wandering according to different inflections; some
relate it to a “loss” and to a dynamic quest (Shirin Neshat, Martijn Veldhoen); some
associate it to the concept of “still dislocation” (Hans Op de Beeck, Kimsooja); some to a
wandering of the mind or memory (Matthias Müller, Jonas Dahlberg) that can also be
accompanied by physical wandering (Seouhgho Cho, Pipilotti Rist, Jonathan
Glazer/UNKLE); some artists thrust the wanderer into the metropolitan contradictory
environment (Jordi Colomer, HC Gilje). The exhibition also hosts the last work of
Michelangelo Antonioni, a concise and intense video showing the artist in a wandering,
poetic and sensuous dialogue with Michelangelo’s Moses.

In the bilingual (Italian/English) exhibition catalogue, published by Silvana Editoriale, the
theme of wandering is further investigated in essays by the curators and artists’
contributions, as well as in an extensive anthology of poems. In a meandering path from
Schiller to Verlaine, from Borges to Luzi, this selection of verses narrates the wanderer’s
poetic modulations from the romantic Wanderer to the 19th century flâneur, until the
contemporary drift.