I was saving this post for an update of VPT, so first things first: There is a minor update to VPT, available at the usual place. I am also working on setting up a simple forum which hopefully will make it easier for people to find information (in contrast to a never ending comments-thread).

Back to Orgelnatt: This was a project that happened in mid-May in Oslo Cathedral (Oslo Domkirke). I was invited by Nils Henrik Aasheim to create a visual framework for a two hour concert with some of Norway´s finest improvisers: Paal Nilssen-Love, Lasse Marhaug, Elisabeth Vatn, Frode Gjerstad, and Aasheim on the organ.

I invited Mattias Arvastsson to join me on the visuals (his projection on the right side in the picture below).

This was an interesting challenge for VPT, not too different from the concert on the roof of the Opera House the year before: Very little time to map the projections to the church walls as it stays light quite late in Norway at that time of the year, so we had only a few hours for setup. I focused on the window arches.

light installation in the Fantoft-Paradis tunnel in Bergen, commissioned for the new metroline Bybanen which opened in end of june 2010.

The installation consists of two long wave patterns of light, one side red-white, the other blue-white. The total length is about 400m. The two wave patterns overlap, so for about 100 m you will see both the red and blue pulse. The material used is neon rope light.

Together with Marius Watz I was invited to make either a light or video work for one of the tunnels for the new Bybanen metroline in Bergen. You can see some images from Marius´ installation here.

I wanted to work with the fact that the train is moving at about 70km/h (about 20m/s) through the tunnel, using the movement of the train as a way of animating the two wave patterns mounted on the tunnel walls.

There were some interesting challenges to this project, as the installation was supposed to be ready for the opening of Bybanen in end of june. This meant I had to send in the proposal for the installation before the trains started to run. I ended up making an animation of some simple waveforms in Processing, which gave a pretty good impression of how this would be experienced when sitting in the train.

There are a lot of factors influencing how the work is experienced.  If you sit by the window closest to the tunnel wall the wave breaks up into rapidly changing curves and lines. If you sit closer to the middle of the tunnel you will see longer stretches of the wave. You will also see reflections of the waves in the windows of the train.

One thing I don´t have control over is the light inside the train, which is really bright. This dimishes the effect of the neon rope light washing the tunnel in different blends of blue, red and white (and potentially casting coloured shadows of the passengers onto the tunnel wall). Thus the installation exists in two different modes: The tunnel as a light modulator which can only be experienced when being inside the tunnel without any trains, or as animated wave pulses when riding the train through the tunnel. 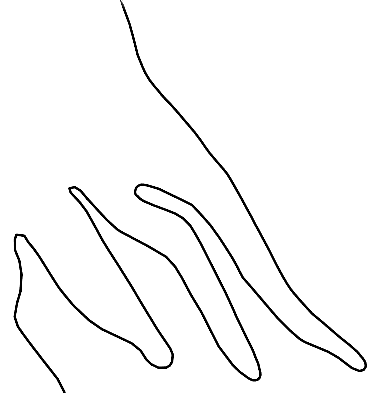 As mentioned in a previous post, Wind-up Birds made an appearance in the foresty hillside of Fløien. Fløiensvingene (The Fløien turns) is a curly path up the steep hill (as steep as 25 degrees), starting at about 180 m above sea level, and ending at about 300m.
It is a city forest, blending the sounds of the city with sounds of nature, as well as the sound of all the people using it.
I quickly edited together a few sound recordings from various points along the path to give you an impression of how the wind-up birds blended into their environment.