The last four months has been a continuation of my interest in working with motion through spaces, objects and landscapes, and the relation between the ephemeral medium of light and physical structures. This has resulted in a series of light-motion installations as well as the development of a completely new series of works called Orbital. 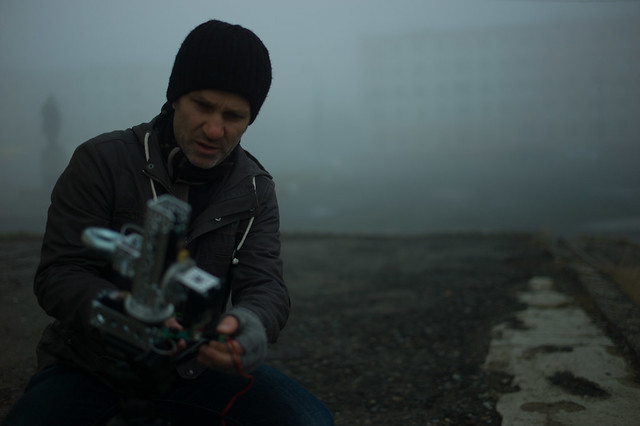 photo:Nik Gaffney
Orbital is based on an idea of exploring spaces and landscapes using a video camera that slowly rotates around its own axes, and captures the world that rotates around it. The camera is like a probe that can be brought along on expeditions in both friendly and unfriendly environments, and is partly inspired by the camera that Michael Snow got constructed for his film La Region Centrale from 1971. Snow´s camera was so big it needed to be flown in with a helicopter to a remote mountain region in Canada, while my expedition camera fits in a small bag and can be used to explore both small and large environments.

A few confirmed activities for next year is my participation at Adelaide Arts Festival with a big new outdoor light-motion installation in end of February, my second solo show at Woodstreet Galleries in April and a book release.

Looking back
Since it´s been a while since my last newsletter I will not go into detail with each project, but I encourage you to check out the video links.
I start with the most recent project and work my way back to the summer.

Solund Light Art Festival November
I showed three installations at this year´s festival: Revolver 2 in Solund Church, spin in the harbour of Hardbakke and kile/wedge on an island in the harbour.
Three artists were invited this year: Viel Bjerkeset Andersen, Ellen Røed and myself.

I presented the first video in my orbital series, made using my custom built rotating camera. I filmed inside a gymnastics rehearsal space, recording slow rotational movements of the camera in the space.
The other artists in the show: Book and Hedén, Holm and Jørgensen, Berge and Havneraas, Konow-Lund, Stensland.

in transit X at Kulturkirken Jakob Oslo, October
I showed a large light-motion installation inside the church, a continuation of previous in transit installations.
Laila Kongevoll and Trine-Lise Nedreaas was also part of the exhibition.

Dark Ecology Kirkenes-Nikel, october
I had the chance to participate in the Dark Ecology journey in the border area of Norway-Russia, organized by Sonic Acts and Hilde Mehti. I did some preliminary sketches using my orbital camera.

Todays Art Den Haag, September
I presented a new version of the light-motion installation trace at Todays Art at the beach outside Den Haag in a building that used to be the archive for the war-crime tribunal for former Yugoslavia.

Klangrum 14, Møn, august
I got the opportunity to present 7x7cirkler at Klangum 14, the light installation I created for Else Marie Pade´s 7 cirkler which was initially shown  in the unheard avantgarde section of the Sound Art exhibition at ZKM in 2012.