junction: light motion installation under King William Bridge for the Adelaide Festival of the Arts

photos by Paul Armour. For larger versions (and a few more images) go to the junction album on flickr.

I was commissioned to make a new installation as part of the blinc program for the Adelaide Festival of the Arts which took place end of february / beginning of march 2015. Blinc, curated by Craig Morrison and Joel Cockrill, was a series of outdoor projection and light-based art works, including works by Squidsoup and Bordos Artworks among others.

I chose my location based on some images Joel sent me, and I immediately got drawn to the beautiful arches of the pedestrian walkway / bike path underneath the King William Bridge, situated in Elders Park in the center of Adelaide. 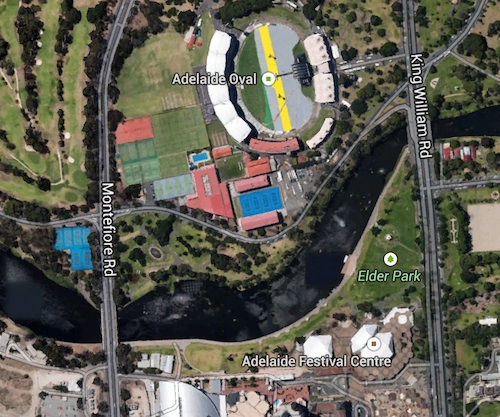 The underpass is about 40 m (130 ft) long and 9 m (30 ft) wide with 9 arches. I wanted to work with the space in a similar way to what I did with trace at LIAF and Todays Art, constructing a grid of LED lines that animates and activates the structures of the space, in this case mainly the arches.

The unusual thing about this project for me was that it was a site-specific project where I didn´t have the possibillity to go there myself. I selected the location based on photos and created the setup based on drawings and an idea of how I wanted it to look. I prepared a detailed manual for the construction of the installation and the festival crew did a good job with the remote install.

This was obviously not an ideal situation, as for this type of work I am really interested in a more direct dialogue with the space, leaving room for improvisation and adjustements, and I quite enjoy the manual labour involved in building up installations. Also, not having been there myself makes the project less real somehow, especially since I like to emphasize the physical experience of my installations. That being said I was extremely lucky to get in touch with Paul Armour based in Adelaide who did a great job documenting the installation under difficult conditions. It gave me a chance to experience my own work the way most people do, through images and video published online.

One thing I discovered watching the video documentation was the fantastic soundtrack created by the cars passing over the bridge which I think worked really well with the motion of the light pulses.

« circles and lines: newsletter december 2014
waiting for the summer: newsletter may 2015 »